The above article appeared in today’s Malaysiakini Portal News and I believe many Malaysian would be please to know that Malaysian Government after so many years realized the need to do away with the quota.

If PM is going to walk the talk, it will be a blessing to Malaysia and at the same time no one would have the excuse of not working closely with all races to bring betterment in Malaysia. The proposal shows the mutuality of political leaders and the new political era in Malaysia.

However, some would worry that PM might give in to extremist pressure and views both inside and outside of UMNO making the proposal nothing but pie-in-the-sky. 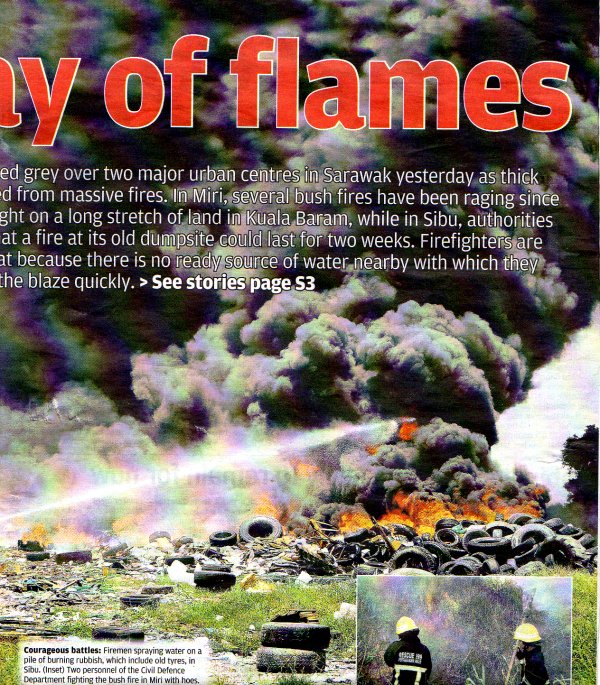 The dump site fire opposite St Elizabeth School yesterday brought poisonous gases to the surrounding residents in the area.

The ‘inferno’ at Sibu Dump-site opposite St Elizabeth School
Wong Ho Leng (See Hua Daily News report) suspected someone brought so many used tyres there to burn for metal in the tyres.
It sure looks like no-one bother about metal collection problem and it has affected the health of Sibu people.

The picture is from The Star front page, it shows how bad the situation. Are we going to turn a blind-eye to all these problems??

It seems that the newly formed association is not even ready with no information of pro-tem committee members published. If the 7 association members have agreed to join then they have to have their decision minuted during their either AGM or committee meeting (if committee authorised to decide) then it is clear-cut case else … more trouble ahead.

Some friends felt that anyone has the right to setup new association as long as the intention is good. However, before the new association is in operation supporters of UCA have ‘bad-mouthed’ it. Labeling it with all kinda of names, like betrayers of Chinese and with ulterior political agenda etc etc. Phew … the topic is getting more heat ….

Since it is just an association and merely could run as an association; what more could it do? To split Chinese? Many might worry that these 7 associations might decide not to be part of United Chinese Association as ‘valueable members’ making UCA weak while others felt that as long as this newly registered 7-association association become a member of UCA it should remove all worries. What do you think?

While cheeky people said, politicians felt ‘left-out’ when 7-clan association could approach CM and get land directly without going through them making them ‘look bad’.

The above article shows the argument of two sides on Patriotism and hero. But I find it quite interesting as when Malaysia was not even formed during that time to talk about patriotism and hero, one has to base on history and your unbiased stand to decide.

A friend commented: “We don’t have to go that far. Ask for those who have had fought for peace during the insurgency in Sarawak after the Independence until the late 80s’. They are long forgotten by the people and the government.” May be he is right. During a kopitiam chit-chat, a friend said “A big chunk of history has been conveniently forgotten to serve political purpose to project certain race as hero and pioneer in fighting for independence. The article above indicated that the incidence happened before formation of Malaysia BUT the movie that depicted the incidence never mentioned about the very fact that those ‘communists’ are fighting against British soldiers and its police.” What the friend said may be true and may be it is not true.