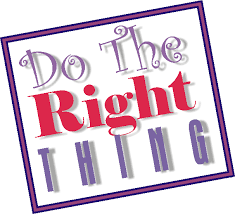 All the time we argue just to prove the point that we are right. Because we want to maintain our image of right all the time. However, some good teaching trying to sway away from this traditional way of thinking by asking “What is right?”

When facing the question of “What is right?” we will be leaving our own so called ‘dignity’ behind and get down the earth and face the reality squarely and objectively. When solving problems based on “What is right?” or “What is wrong?” it will be above political party and personal interest and less defensive of our own stand.

However, when adopting such ‘progressive’ method to solve problems. One would be seen as going against own political party’s interest or clan’s interest as you could be exposing the weakness and malpractice of own political party or organization. When one is in that situation you could be genuinely working for ‘justice’ of Rakyat but will soon be victimized by members/comrades.

Some of those adopting ‘What is right” methodology are under pressure and forced to give in to “Who is right” concept back to traditional way of doing things. BUT will the organization have ‘bright’ future when everyone is protecting oneself and all doing the ‘traditionally right thing’ to please the leaders in order to stay inline with the beat of the rest?